Ministers, All the Members 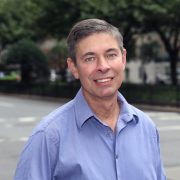 Meet our pastor. Pastor Jon came to Old Bergen Church in 2010 after 22 years of ministry. He has served congregations in Orlando Florida, Hendersonville North Carolina and Charleston, South Carolina. In addition Rev. Brown worked as a Program Director at Montreat Conference Center and on the staff of the national offices of the Presbyterian Church (USA) as Director for Mission Interpretation. He graduated from Union Presbyterian Seminary and also studied at the University of Bern in Switzerland. He is the father of two young adult children.

Rev. Brown has been called upon as a speaker, preacher and workshop leader at numerous conferences and events. He also has written for a number of denominational and ecumenical publications and curricula. But his greatest joy is working with the people of a local faith community.

A native of Orlando, Florida, Pastor Jon has family roots in New York and is thrilled to be living and serving this congregation in Jersey City. Upon arriving he stated that being called to Old Bergen Church is like “finding a treasure hidden in a field.”